Establishing of Holy Ground sites in the United States in 1965,
a video journey with True Father.

Compiled and edited by Charles Patterson with inspiration and assistance from Joe Kinney.

In February of 1965, True Father came to the United States intent on establishing holy ground sites throughout the country. A number of our early members met Father and traveled with him around each state. 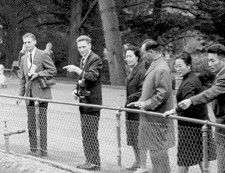 One member, George Norton, was not only the primary driver on this trip, he was also the cameraman. He had an 8mm movie camera that he brought with him and he tried to document as much of the trip as he could. Another member, Gordon Ross, had a 16mm movie camera and was able to also record some footage along the way. Gordon also helped with some of the driving.

The historical scenes they filmed were later transferred onto video tape and then digitized. The collection of film clips all together made up about a two hour video. The clips were not completely in chronological order, though, and many of the scenes could not be identified clearly either. There were also some locations where two cameras were used, providing multiple views of the same events.

In many of the locations, audio recordings of Father’s meetings with the members were made on reel-to-reel tape recorders, but these recordings were turned over to the church headquarters at some point and were not available at this time.

George Norton, in more recent years, reviewed the video of the trip and recorded his own recollection of some of the scenes as they appeared in the video.

In early December, 2021, Joe Kinney (former East Garden member and historian of the New Yorker Hotel) had collected the video and George’s narration and had the inspiration to try to organize and compile them in one new video. I offered to help with this project. Joe provided the video, audio, and a transcription of the audio. The organizing and editing process took many hours over the course of about 6 weeks.

I was able to review the video and divide it into individual clips (approximately 120 different clips) so that George’s narration could be paired up with the proper scenes. This worked well in most instances. There were still a few locations that could not be clearly identified. There are also some scenes in church centers where George acknowledges that his recollection may not be completely accurate.

Additional assistance in identifying clips in the video came from reviewing some of the testimonies from the members who were on the trip or came to the locations that Father was visiting.

Many of these were printed in the church newsletter at the time which was called “The New Age Frontiers”. One of the members, Galen Pumphrey, also wrote an extensive memoir which included his own experiences as well as a number of quotes about the trip from Gordon Ross (the second cameraman and driver). These were also immensely helpful for researching the video locations. These newsletters and memoirs are available for review on the website tparents.org.

You can find some of their memoirs here:

There is also a lot of documentation of the 1965 holy ground trip in the book “40 Years in America” that was compiled by Michael Mickler in the year 2000.
It is also available to view at:
https://www.tparents.org/Library/Unification/Books/40Years/40Years.pdf

Watching the videos and reading some of these testimonies and stories helps to give one an idea of both the joys and the challenges the early members faced on this 15,000 mile trip. They did not know what to expect when Father said he wanted to travel through all of the states. Looking back now, we know what type of schedule Father liked to keep, but it was all new to them. These early members were truly pioneers in this regard.

Here is part of the testimony from Galen Pumphrey:

Soon after his arrival in the United States, Reverend Moon began his trip around the country. The primary purpose of his world trip was to bless holy grounds, and in so doing, make a condition for the restoration of the world to God. The grounds were the physical mixing with the soil of Korea. From each holy ground he collected some soil to take back to Korea. He also tried to find a rock and some soil at the capital of the state or at a city hall.

For the trip, members had purchased a new automobile, a blue Plymouth Fury station wagon. The car was loaded with people, Reverend Moon, Mrs. Won Pak Choi, Young Oon Kim, two drivers, George Norton and Gordon Ross. Mrs. Won Pak Choi was not only Fathers interpreter but Mothers personal emissary representing her on this most important trip. There were other people who rode in the car on various legs of the trip. Many of the details of this trip were well recorded through letters and articles in our monthly news letter, “The New Age Frontiers”. The route of the trip was written down and the approximate locations of the holy grounds.

The plan was to travel all 48 contiguous states in 40 days, and make a holy ground in each state. To do this, meant often traveling around the clock. The trip wasn’t a leisurely sight seeing tour. Meals often meant buying groceries in a store and eating in the car while traveling. Often sleep meant catching what sleep they could in the car while traveling. The car was often driven at speeds of 100 mph or more, on isolated stretches in the west in particular.

After viewing the video clips and reading many of the testimonies, one can feel close to the heart of the early members and the challenges they faced assisting Father and God’s Providence at that time.

The total time of the video is almost 2 hours. It has been divided up into three sections. If you view the video on YouTube you can find links in the description to jump to each section

Part 1 covers Father’s arrival in San Francisco and the group’s activities in California locations where they did some sightseeing and also began the process of establishing the holy ground locations.

Part 2 begins in Phoenix, Arizona and continues through the south and up the East Coast.

Part 3 goes from Vermont, across the northern states to Washington and Oregan, then concludes back in California.
At the end of part 3 is a short bonus clip with images and a few quotes from George Norton

The three sections of the video have also been recorded separately and are available on Vimeo where they can also be downloaded.