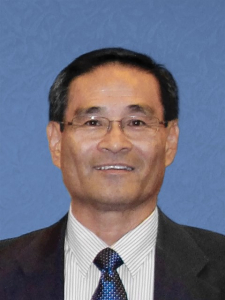 Our dear brother Kensaku Takahashi passed to the spirit realm in the early morning of January 24 after a long battle with pancreatic cancer.  He was known and loved by many in this community and throughout the world.

The Seonghwa ceremony was held on Saturday, 1/30, with a limited number of people in person, but it was also broadcast on Zoom where close to 250 people from around the world were able to attend.

A few video testimonies were shared during the Seonghwa. Links to these testimonies are provided here.

Donations to help the memorial fund for Kensaku can be made at the GoFundMe link below. Donation by checks can be sent to
Yasuko Takahashi
69 High Street
Tarrytown, NY 10591
Links to the Edwards-Dowdle Funeral Home and Wonjeon site are also below.

Memorial Fund for Kensaku at GoFundMe 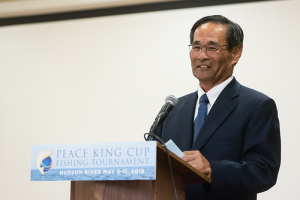 The life of Kensaku Takahashi

Kensaku Takahashi was born on October 13, 1948 in Okayama prefecture Japan as the first son of Jitsuzou and Emiko Takahashi. He had four younger brothers and sisters.
His father loved poetry by Kenji Miyazawa (Unbeaten by Rain-雨にも負けず）And took “Ken” from the poet’s name in hopes that he would live that way of life.
His father owned a metal casting factory Takahashi Co. in the City of Kasaoka. People could see their big factory sign from the sea. His family had a very deep faith in God (Konkou- kyo 金光教) which is a very similar principle that God is a Parent. His love for religious thought, martial arts, and the ocean stemmed from an early age. He attended Konkou High school where he joined the Judo club and studied Konkou-kyo which he loved. While he was attending Kansai University in Osaka City, he met CARP Unification Church in Feb of 1967. He felt so deeply moved by the principle that he started his Mission immediately.

He was a strong man but had a tender, kind, serving heart with a sincere life of faith, serving and loving many people in his life. He loved True Parents and True children so deeply and he loved his family fully. He was not a man of many words, but you could truly feel his love through his actions and serving heart. His beautiful life will forever be cherished in his grandchildren and children. All four children were blessed by True Parents. Chonja-Tadakimi, Shindo-Niina, Yoshiko-Hisatomi, Junko-Sunrey. Ten grandchildren: Aeka, Meika, Kenju, Kota, Lia, Kai, Sarah, Lucas, Megumi and one on the way in May.

In February of 1973, he came to America as one of the 120 missionaries who True Parents called to come to America as part of the 2nd 36 members group. He started working under True Father’s guidance directly and joined the International World Crusade as Father started giving speeches nationwide. He worked as a Security Guard at East Garden because of his martial arts background and spent 10 years dedicated to serve and protect the True Family. Throughout those years he had so many precious experiences. In 1977 February 21, he was blessed as a 74 couple in New York to Yasuko Tobita and as he worked closely with the True Family, he started his own family. He always expressed how lucky he was to have Yasuko as his wife.

Kensaku gained the black belt at Oyama Karate and True Father appointed him with a mission of martial arts. He then set up the Agora House at Belvedere as the Martial Arts -Dojan to start his new mission.
In 1982 Father asked Kensaku to join CARP and he started martial arts youth education under the guidance of Dr.Seuk. They opened the Martial Arts Club at Universities in California , Massachusetts, Texas, and NY as a way to spread the principle. In 1983 Dr.Seuk asked that the martial arts mission expand to the world. In total, Kensaku taught and educated youth in martial arts in 21 countries within 3 years. Asia: (Philippines, Thailand etc) Europe: Germany, England, France, Norway, Russia.)South Seas Island. South America (Panama,Brazil etc) Africa-Kenya. He touched the spirits of many young people with his caring and kind heart. He was devoted to expanding martial arts and the Principle.

After a 40 day Cheongpyeong workshop in 1996, he was assigned as a Japanese National Messiah to Turkmenistan. Under his title as a Master of martial arts he was able to enter the country and spread the principle through Martial Arts and blessing ceremonies despite the challenges of working within a post-soviet, socialist country.

In 1999, Father called all Japanese National Messiahs to start the Leda project in Paraguay. After the Olimpo workshop with True Parents. He became part of the supporting team for the Leda project conducting activities outside. He was appointed as Ocean Church director in the U.S. and developed the Ocean Providence through the King Cup Tournament at the Hudson River. At the Hudson River, he always was at Father’s side fishing as the boat captain.

After True Parents moved to Las Vegas, he was tasked with taking care of Father’s boat in Lake Mead in Las Vegas. He served True Parents everyday for 3 years as their boat captain till the last possible moment, until the afternoon of July 15th 2012 when he left for Korea. After entrusting the Ocean Church to new 2nd-gen leadership, he moved onto the Leda Project in Paraguay as his last mission.

Kensaku was battling pancreatic cancer for nearly two years and was doing well with treatment for the past year. However, recently his condition changed and the time came for him to be called to Heaven. He ascended peacefully in his home in Tarrytown, NY on January 24, 2021 surrounded by his wife, children and grandchildren.